On my first trip to San Francisco last May, I passed a Benefit Cosmetics boutique one night after dinner. Obviously it was closed, but I knew I had to return and visit one. For my birthday, I wanted to have a little getaway somewhere that didn’t include rushing all over the place and doing things I enjoyed and hopefully eating at places that I was dying to go to again and that all boiled down to San Francisco. I was there from Friday morning until Sunday morning. If you want to find out more about what I did there you can read it here but I really want to tell you about Benefit. (Sorry for the rambling!)

After a little nap and lunch, we went to find Benefit Cosmetics on Fillmore Street (as it was the closest one to our hotel). This wasn’t the one I saw the first time but it was a boutique regardless. I felt overwhelmed when I stepped into this cute store! So much so that I got a picture of outside and not inside lol. 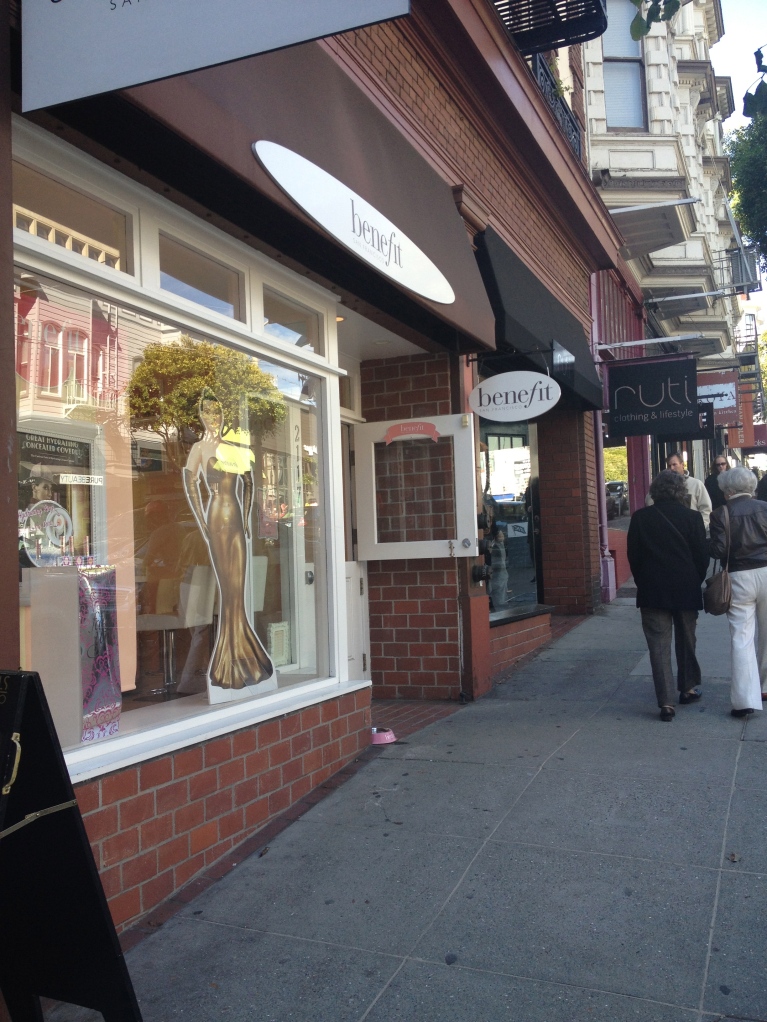 I had seen a few products online that I wanted to check out and one of their make-up artists immediately grabbed some and got to work. This is what I bought:

As I’ve mentioned before and as you can see in my blog title, I have a thing for lip products, so trying one of the lip glosses from Benefit was a must! The MUA used the Cha Cha Tint and Sun Beam on my lips and then applied the Coralista and it was so beautiful. I didn’t buy the Sun Beam because I just got the Watt’s Up! sample and I wanted to try it before I bought something else. The Cha Cha Tint was also applied to my cheeks and I have to say, for a black girl, peachy/maango-y colors can be amazing for our skin tones! It was the first time make-up was applied and my husband kept telling me how pretty I was (for the rest of the day). The MUA and the make-up did what it was supposed to do – highlight my features.

The other product I wanted to try was the Stay Don’t Stray. I love my Laura Mercier eye basics but this one is not only for eyeshadow buy concealer as well. Considering I can wear the Laura Mercier alone, I think it will be good to use the Stay Don’t Stray around the whole eye and then just apply the Eye Basics to the lid. Under the eye, I will use the Fake Up, according to the website:

I can say that this stuff is truly amazing. I only had the POREfessional on my skin when she applied this so I think that helped as well. This was after 2pm and well into the night, 4 sangrias later after 10pm, I still looked stunning :P. For a final touch on my lashes, she extended them even further with the They’re Real mascara. I think between that and the Laura Mercier mascara, I won’t need to buy false lashes! I was also given two samples of their brightening make-up to try. 🙂

Again, I just flew out of the store so happy I didn’t take a picture at the time, but it did cross my mind while she was doing it. But this is somewhat what I looked like later. I really need to start being photo happy! I did however get an OOTD the Saturday. The funny thing about San Francisco is, no matter how many layers I wear, I am still freezing. 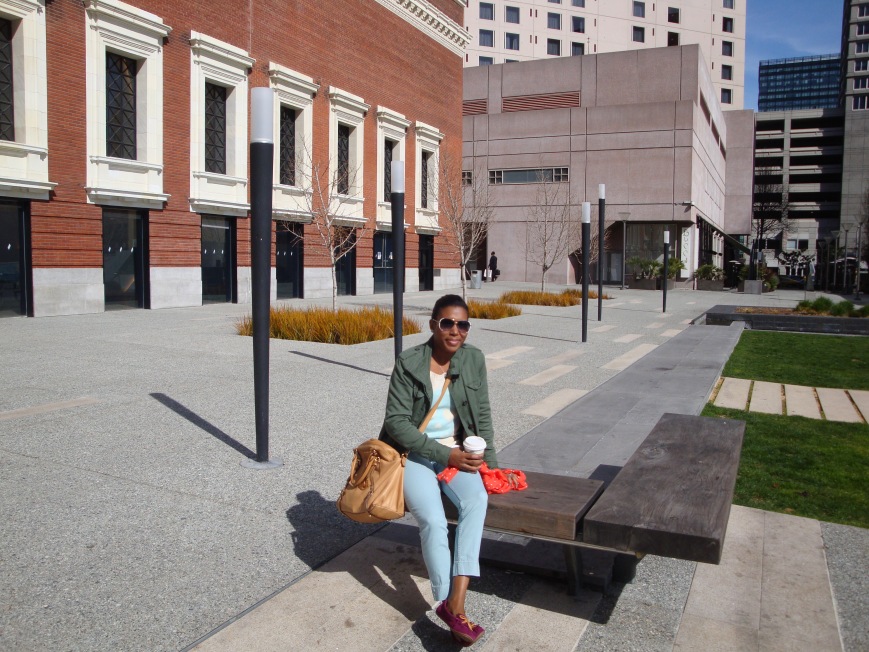 Outside of the Contemporary Jewish Museum

As you can see, I started out with my purple moccasins from Sole Society. It was my second day wearing them and they popped! I was so upset. I had to drag my foot (not literally but I had to walk slowly) to the mall and I just bought these cute blue shoes from Aldo. Look weird? I just happened to get the last pair in the 7 of which one was the display shoe. Womp. I contacted them about it so I’m just waiting for a response. I really liked those shoes.

So this is the fashion aspect of my trip and as mentioned above I’ll have a little recap of the trip on my other blog.